Learn why eating poop is important for guinea pigs.

Yes, it does sound gross – but it’s true! Guinea pigs do actually eat (some) of their poop. It’s actually really important to their digestive health. So, why do guinea pigs eat their poop and what do you need to know about it?

To understand why the heck guinea pigs eat their own poop, I want to make sure you have a basic understanding of how a guinea pig’s digestive system works. After all, that’s where poop comes from! Eating their own feces is actually part of their digestive process.

A guinea pig’s digestive system is designed to be constantly moving. This is why they need hay available at all times – constantly eating hay keeps their system going. This also means they are constantly pooping! Guinea pigs are also herbivores which means they will only eat plant matter.

A lot of the digestive process happens in a part of the large intestine called the “caecum.” This is where beneficial bacteria break down food and allows the body to absorb the essential nutrients from the food. Then it flows through the rest of the intestines and out of the piggie.

It takes about 20 hours for food to get completely through the digestive tract. A guinea pig’s digestive system is actually pretty sensitive, which is why feeding a healthy diet is so important. A well-balanced diet of pellets, fresh hay, and fresh vegetables has a big impact on guinea pig health. And of course, constant access to clean water. A dirty water bottle can lead to digestive problems if there is bad bacteria buildup inside.

Why Do Guinea Pigs Eat Their Poop?

Guinea pigs actually have two different types of poop – they aren’t just choosing to eat random bits of their poop when they feel like it. We’ll talk more in-depth about the two types of poop in a second.

The main reason guinea pigs eat their poop – also called coprophagy – is to get back some of the vitamins and nutrients that didn’t get absorbed by the body the first time. It’s actually not 100% known why guinea pigs eat their poop, but this is the most commonly thought reason. Guinea pigs will eat this type of poop to absorb vitamin k, vitamin b, and other essential vitamins when they go through the second time.

Basically, some of the food that goes through the caecum don’t get fully broken down or all the vital nutrients don’t get absorbed by the piggie. This results in a special kind of poop that the guinea pig will eat to get those nutrients back.

As I mentioned, guinea pigs produce two different types of poop. One of the types is normal poop you’d sweep up from their cage. The other type is what they eat – and you really shouldn’t see these too often.

These special poops are called caecotrophs or cecal poops as they are sometimes called. These are usually much softer and greener than regular guinea pig poop. Guinea pigs normally will grab cecal pellets right as they come out of the body, so you shouldn’t normally see these throughout the cage.

What To Look For in Normal Guinea Pig Poop

Your guinea pigs’ poop can actually tell you a lot about their health.

Regular poop should be brown, firm, and oval-shaped. You’ll learn over time what is normal size and color for your specific guinea pigs. You’ll also start to see what is a normal amount of poop for the number of piggies you have in your cage. Knowing what the normal, healthy poop for your piggies looks like and normal guinea pig behavior will help you notice when anything looks out of the ordinary.

I usually check out the state of my guinea pigs’ poops while spot cleaning their cages. We use fleece, so when I sweep up the poops every day it’s really easy to see if anything looks weird or unusual. If you don’t use fleece and aren’t spot cleaning on a regular basis, then it might be a good idea to make it part of your normal routine to check the poop in the cage for anything that looks out of the ordinary.

Anything out of the ordinary with poop can signal a diet change that needs to be made, shows that certain food may have upset your pet’s stomach, or could be a sign of a bigger digestive issue. If you notice anything unusual with your piggies’ poop, it’s important to get them in to see the vet as soon as possible to figure out what is going on.

The first thing you might notice that is out of the ordinary with your guinea pig’s poop is the shape. The shape can tell you a lot about whether something is going on internally.

Runny poop or diarrhea is an obvious sign that something is going wrong. Any very wet poop is usually a sign of a sick guinea pig and you need to watch out for any sign of dehydration. You might also see soft poops that are teardrop shaped or are more squished at one end. And last but not least, poops that are much smaller than normal are also a warning sign.

If you are seeing cecotropes or more wet and green poops around the cage, that could also be a sign that something is going on. Any poop that seems more wet than normal could be a sign of an issue or a diet change that needs to be made.

Overall, it’s a good idea to take note of normal poop when your guinea pigs are healthy so you can easily spot it when anything looks unusual and take care of it as early as possible. It’s up to us as responsible guinea pig parents to stay on top of our guinea pigs’ health.

Final Thoughts on Why Guinea Pigs Eat Their Poop

Yes, I know it’s a little bit gross to think about. But poop is super important to a guinea pig’s health. Knowing why your guinea pig eats their poop can make it a little less gross of a process.

Why Do Guinea Pigs Eat Their Poop? 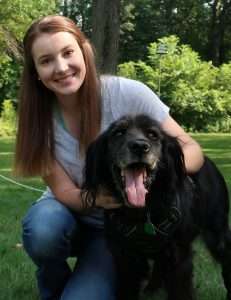